It is a new year, and with the exit of the 112th Congress (one of the worst in our history) and the political haggling of the first of many ‘fiscal cliffs’ now over, America seems to be facing a new and potential hazardous future if it chooses to stay on the same destructive course. With the upcoming inauguration of Barack Obama for his second term, the newly sworn in 113th Congress, and three new fiscal nightmare scenarios looming, we once again stand at the precipice of doing what is necessary, versus what will suffice the status quo and political power grabs.We often get caught up in media cycles and do not look at the big picture.  Sometimes what is necessary is for a look in from the outside, such a view sometimes puts things into perspective. 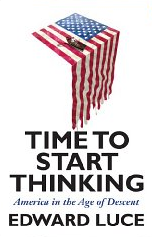 With that in mind everyone interested in the future of the U.S. should read Edward Luce’s Time to Start Thinking: America in the Age of Descent. Luce, who is the Washington Bureau Chief for the Financial Times and a former speechwriter for former Treasury Secretary Lawrence Summers, outlines the problems facing the U.S. as the rest of the world continues to grow and our economic, and political, strength continue to diminish. He outlines the social, economic, and cultural decline that the nation faces– mourning the decline of American pragmatism which has seen the nation push through past crisises and threats of decline.

This time around he, as well as a litany of other experts he cites, are not so hopeful. In the New York Times review of the book, Jonathan Rauch summarized some of the main points outlined in the book. Summarizing Luce’s arguments, he states

where does that leave the country? Not in a great place, if Luce is right. Jobs are disappearing, median household income is declining, skills are in short supply, health costs hobble competitiveness, outsourcing and offshoring and automation marginalize working-class men, and through it all political leaders either sit by helplessly or actively oppose remedies. And that’s just in Chapter 1. Later sections bring us dysfunctional schools, demoralized government, burdensome debt and deficits, failing innovation, hidebound regulation, crumbling infrastructure, a paralyzed Congress, a broken campaign-finance system and more, much more.

Though the book does a great job listing all the doom and gloom scenarios facing the U.S., its best asset is that it illustrates that our decline is relative. It is relative to the rest of the world which is still struggling to find its bearing and inherit its newfound political and economic power. We have time to adjust, to make the necessary changes, and to adapt the U.S. for a new decade and century before it is too late. The book highlights some of our largest threats and challenges of the past century– the Cold War, the emergence of Japan in the 1990’s, and now a globalized world and the emergence of China.

The U.S. has weathered the same alarmist voices which speak of America’s decline for decades. What the book does is raise the alarm against absolute decline. Winston Churchill once said that America always does what is necessary when it has exhausted all other options, yet again our backs are against the wall and our leaders must act to reemerge from a financial crisis and political paralysis.Before the fall of the Soviet Union, Georgi Arbatov, Gorbachev’s close aide told the U.S. “We [the USSR] will do a terrible thing to you; we will deprive you of an enemy.” This time around America faces the worse enemy in its history– itself. Over a century ago Abraham Lincoln envisioned this decline from within when he stated  “America will never be destroyed from the outside. If we falter and lose our freedoms, it will be because we destroyed ourselves.”

Luce makes a number of good points, raises a number of valid questions, and offers some pragmatic solutions for the future of the U.S. Let’s hope someone is listening. Reading this book would help.