Whether President Obama or Governor Romney win the election net week, one thing is pretty certain ( though no really wants to admit it), whoever wins will preside over an economic boom in the US. Fareed Zakaria makes a compelling argument in his latest article in the Washington Post. According to the most recent International Monetary Fund’s World Economic Outlook; 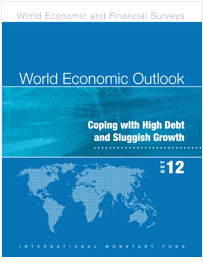 when looking out over the next four years — the next presidential term — the IMF projects that the United States will be the strongest of the world’s rich economies. U.S. growth is forecast to average 3 percent, much stronger than that of Germany or France (1.2 percent) or even Canada (2.3 percent). Increasingly, the evidence suggests that the United States has come out of the financial crisis of 2008 in better shape than its peers — because of the actions of its government.

Despite Mitt Romney’s argument to the contrary, or that we could be doing “better” than  we are now, other leading economists have echoed the positive trends that are being illustrate by the economy.

Kenneth Rogoff and Carmen Reinhart, the leading experts on financial crises, argue that the United States is performing better than most countries in similar circumstances. U.S. consumer confidence is at its highest levels since September 2007.

Corporations have also bounced back. Corporate profits are at an all-time high as a percentage of gross domestic product, and companies have $1.7 trillion in cash on their balance sheets. The key to long-term recoveries from recessions is reform and restructuring, and U.S. businesses have been quick to respond.

In every aspect of the economy, except for jobs, we are doing nearly as well as we were before the 2008 crisis. The only exception has been housing which has stalled behind, but that is to be expected since the Great Recession initially began with, and was caused by, the housing bubble. It is no surprise that it is taking longer to recover, but the housing market has finally turned the corner.

A McKinsey & Co. study of crises in recent decades found that the United States is mirroring the pattern of countries with the strongest recoveries

What is also true is that economies are cyclical creatures. We have booms and busts and the government has always tried to play referee by softening the busts, while reaping the rewards of the booms. The US economy is the most diverse and vibrant of any of the developed world’s economies. It is no shock that we are coming back, the only question is if it was fast enough.

We are undergoing a resurgence of the American economy. All aspects shows significant signs of improvement, or positive growth signals. The American energy revolution, thanks to shale oil and gas exploration, will boost the economy and provide low cost energy and drive the US economy for decades to come.

And then there is America’s energy revolution, which is also bringing back manufacturing. U.S. exports, which have climbed 45 percent in the past four years, are at their highest level ever as a percentage of GDP.

However, what is ironic is that if President Obama is re-elected he will take credit for the recovery as a vindication of his policies. If Governor Romney wins he will inherit an economy on a positive trajectory, and claim victory of his leadership and policies, and govern over an economic boom. The real winner is the dynamism and resilience of the American economy, both candidates are just riding on its coat tails.

← “Too Big” To Do Anything
Obama Vs. Romney…according to the world →