First and formost, congratulations to the president on his second inauguration and the start of his second term. The past four years have been tumultuous and were filled with numerous political battles, unexpected disasters, international crisis’ and incidents, and the slow reemergence of the nation’s economy following the financial crisis of 2008. With that in mind President Obama’s first term must be graded as incomplete due to the fact that it will take several years to see what the tangible impact his policies and efforts will eventually lead to. Many of his policies, primarily Obamacare, will begin to take effect in the upcoming years as well as the change in our global engagement. The ending of our two wars, the Middle East in the aftermath of the Arab Spring, Iran’s nuclear ambitions, and our shifting focus to the Pacific all make the next four years on the world stage very interesting. 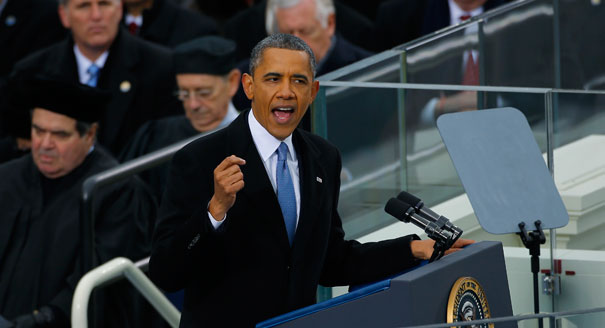 In his speech, Obama sought to tie liberalism to a long American tradition. Photo from Reuters

Domestically the president dealt with a politically divided nation and an obstructionist and far-right leaning Republican Party, primarily due to the efforts of the Tea Party. Many questioned the president’s leadership style, his true political philosophy, and his ability to negotiate and compromise to reach deals to help further the nation. Whatever skepticism or questions that may have existed were clearly answered, and put to rest, during the president’s inaugural speech this past Monday. I, as many, had hoped for  a more vintage and hopeful Obama who would speak above the petty political fights that have consumed the day to day battles engulfing Washington. What could have been a grand call to unity on the largest public stage and the loudest bully pulpit– targeting and rallying Americans, and bypassing the sclerotic Congress–turned into a direct rallying cry to the president’s base. The Obama who showed up was a new politician who was unshackled by the constraint of reelection which has bogged him, and his policy goals, down for the past four years. Whether one agrees or disagrees with the agenda that the president outlined, what is evident is that the next four years seem to be set up as a battle between the administrations newfound confident liberalism and the politically divided Congress.

Numerous pundits and writers had differing and insightful analyses of the president’s speech. Whereas some thought it was inspirational, others found it combative,  and to an extent too policy driven, rather than overarching. Dana Milbank, of the Washington Post, states in his article

Thus ended the warm-courage-of-national-unity portion …What followed was less an inaugural address for the ages than a leftover campaign speech combined with an early draft of the State of the Union address.

the speech lacked the unifying or transcendent ideas that could help Obama do much more than continue the Washington version of trench warfare during his second term. If you were hoping that the president would set the stage for a grand bargain to restructure America’s entitlement programs and fiscal health for the 21st century, you wouldn’t have found much encouragement.

Jonathan Martin and John Harris of POLITICO perfectly sum up the overall vision, tone and direction of the president’s speech in their article. They state that

one of the most striking elements of Obama’s address: There was nothing defensive about it. He clearly believes that the 2012 election, for all its snarling and divisive tone, served a useful purpose. By his reckoning, it demonstrated that there are more people on his side — immigrants, minorities, liberal-minded young people and women, beneficiaries of big government — than there are on the other side — older whites, cultural traditionalists, wealthy and upper-middle-class earners who recoil at what they see as the remorseless expansion of government and resent being stuck with the bill.

This Obama 2.0 greatly differs from the ‘hope and change’ candidate and ‘post-partisan’ president of four years ago. He now feels vindicated and validated ( as I argued in a previous post) to go after his core beliefs and his progressive policy goals. Martin and Harris elaborate on this point by stating

Monday’s address will vindicate the patience of liberals — environmentalists who wanted more, supporters of single-payer health care who viewed the Affordable Care Act as an unsatisfying consolation prize — who always believed Obama was more on their side than he was letting on. It will also vindicate the fury of conservatives, who can now say they correctly had Obama’s true measure while refusing to believe his appeals to bipartisanship or find common ground with him in the first term.

Of all the analysis, David Brooks of the New York Times masterfully puts the the presidents ambition and goals, as well as his speech and its impact, in great perspective. He argues that

Obama misunderstands this moment. The Progressive Era, New Deal and Great Society laws were enacted when America was still a young and growing nation. They were enacted in a nation that was vibrant, raw, underinstitutionalized and needed taming…We are no longer that nation. We are now a mature nation with an aging population. Far from being underinstitutionalized, we are bogged down with a bloated political system, a tangled tax code, a byzantine legal code and a crushing debt…. [However] He came across as a prudent, nonpopulist progressive. But I’m not sure he rescrambled the debate. We still have one party that talks the language of government and one that talks the language of the market. We have no party that is comfortable with civil society, no party that understands the ways government and the market can both crush and nurture community, no party with new ideas about how these things might blend together.

If a debate and a war of ideas is what the president was seeking then the next four years will surely put him and his Republican adversaries to the test. What we can hope for is that this battle, which should be a rational and an elevated one, can lead some some real and tangible solutions to the problems facing the nation.What President Obama should hope for, and strive for, is not simply a liberal and progressive legacy, but rather a legacy of success based on compromise, and more importantly, leadership.