First and foremost, congratulations to President Barack Obama on winning re-election yesterday and on a well run, and tremendously successful, campaign. 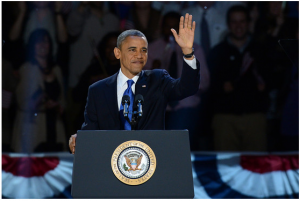 Despite all the punditry and right-wing news and media projections it was not as close as anyone had expected. The Obama campaign was well organized  thanks to the incredible work of David Plouffe, David Axelrod, and Jim Messina, who I believe will go down as the best campaign organization in the modern era. Their ability to turn out the vote using all methods of traditional media and modern technology, along with a strong grassroots political machine, ensured a decisive and quick win for the president.

However, in addition to praising the president, there must be congratulations for Governor Romney. When all was said and done, he graciously conceded defeat ( as I had hoped either of the candidates would have here), and sounded dignified and as a man who could have been president, but just did not win. His tone, demeanor, and class was something I had hoped to have seem earlier from him throughout the campaign, but it is easy to look back and say what someone should have done. However, he ran a good campaign, despite the fact that at times seemed to veer off course and had recover from repeated gaffes, but in the end, was no match to the president, no matter what he did. Aside from the circus which was the Republican primaries, Mitt Romney and the Republican party just did not fully understand or take advantage of the demographics and sentiment of the nation. It was as if President Obama was running a campaign against someone running in 1994.

In today’s political world, parties must adapt or risk elimination, and the GOP has a lot of work to do assessing what kind of party they are, and what kind of party they want to be if they want to re-emerge as a national party, rather than a minority opposition party relegated to winning congressional seats. What will be important to see is if now, after years of obstruction, if the GOP will work with the president to solve the major issues facing the nation. Today, Speaker of the House, John Boehner made a conciliatory speech congratulating the president on his victory and signaled his willingness to get a deal done regarding the upcoming fiscal cliff.

Regardless of the GOP leader’s willingness, he still must  deal with a fringe element in his party which might serve as a much as, if not more, of a difficult opponent to him than the president. While Boehner must battle with the Tea-Party and their cohorts in congress, the president will have to do battle with a much more difficult and immovable obstacle, the status quo. As it was yesterday, and is today, Barack Obama will have to face the same divided Congress, with the Democrats controlling the Senate, and the Republicans controlling the House of Representatives. That will be his biggest battle and challenge, and overcoming what currently is, with what can be, will define his legacy and the next four years of his administration.