The debate between science and spirituality (or religion) has been waged for centuries, and is now more relevant than ever. In their book War of the Worldviews : Science vs. Spirituality,  Deepak Chopra and Leonard Mlodinow each seek to make the case for their respective areas of expertise. This debate, or battle, is a fundamental issue in our world and helps shape the views of both individuals and societies. Some argue that each are mutually exclusive- that religion is the be all and end all, while others contend that science is the only true universal fact governing our reality. For all those interested in this subject, or who simply seek to understand the arguments of the opposing side, this book is a necessary read. 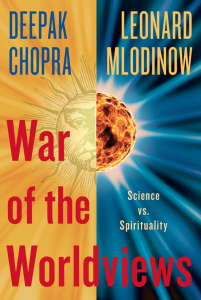 The book is comprised of four major sections: Cosmos, Life, Mind and Brain, and God. Each section has a chapter by each author and alternates between an argument for a position, and a rebuttal by the other. Chopra and Mlodinow seek to address, and in some cases answer, such fundamental questions as: How did the universe begin? Where did life come from? Is there design in nature? Each author makes a specific argument in each section,

Without defending organized religion, Chopra asserts that there is design in the universe and a deep intelligence behind the rise of life. Mlodinow, CalTech physicist and the writing collaborator of Stephen Hawking, argues for the viewpoint of science, specifically of modern quantum physics.

What was extremely evident after reading this book is that both sides have compelling and substantive arguments.  Science can, and does, answer a lot of the questions of life, however where it falls short Chopra masterfully contends that a higher being fills in the void. Rather than finishing the book in favor of one side against the other, I instead had a deeper and more respectful view of both arguments.  There are many uncertainties still in life, however, what this book illustrated is that our worldview does not not need to be black or white, and that these two opposing world views can complement each other and give us better insight into a world that both sides argue for. To listen to more of the debate between the authors, go here.