As some of you may have noticed I have a ‘What I’m Reading’ section on my sidebar. These books are on my bookshelf and I am currently educating, or entertaining, myself with. Currently, I just finished is The Righteous Mind: Why Good People are Divided by Politics and Religion by Jonathan Haidt. Haidt is a social psychologist at the NYU-Stern School of Business and in this stellar book he confronts human morality, where it comes from, and why people differ on an array or issues especially politics and religion. 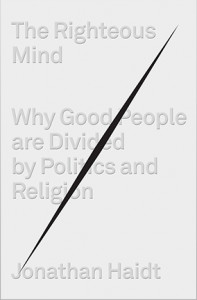 For anyone interested in morality and why we act in certain ways, and think about things the way we do, this is your book. Reviewing the book for the New York Times, William Saletan sums up major themes of the book.

To the question many people ask about politics — Why doesn’t the other side listen to reason? — Haidt replies: We were never designed to listen to reason. When you ask people moral questions, time their responses and scan their brains, their answers and brain activation patterns indicate that they reach conclusions quickly and produce reasons later only to justify what they’ve decided…The problem isn’t that people don’t reason. They do reason. But their arguments aim to support their conclusions, not yours. Reason doesn’t work like a judge or teacher, impartially weighing evidence or guiding us to wisdom. It works more like a lawyer or press secretary, justifying our acts and judgments to others.

I suggest you read the review and watch the interview with Bill Moyers. More importantly, buy this book and read it. You will thank yourself and be a better, and more understanding, person because of it.

( For those of you interested in morality. This book utilizes some of the research and expands on the 60 Minutes special featured a few weeks ago on the site)

← Benghazi-Gate as Satire
The Elephant in the Room →