Obama Vs. Romney…according to the world 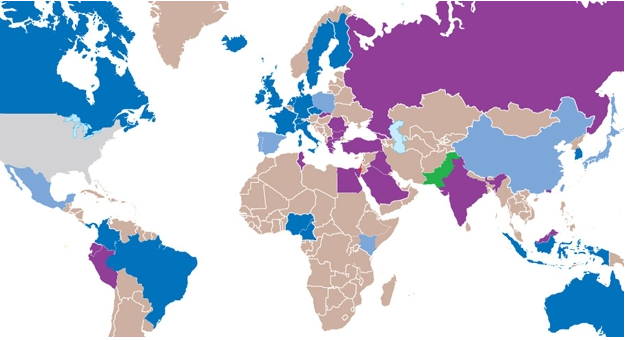 With all the endless campaigning and non0stop partisanship going on ahead of Tuesdays election it would be nice to take a step away, like internationally, and see what the world has to say about the upcoming presidential election. Fortunately, Foreign Policy did just that in this article. By taking numerous world polls we see that the world is not as divided about the election as we may be here at home. As you can tell from the map above, the world seems to be pretty blue.

Obama is preferred over Mitt Romney in 31 out of 32 countries in the UPI poll and 20 out of 21 countries in another BBC World Service/GlobeScan/PIPA survey. Fifty-one percent of respondents in the UPI poll said they would cast a ballot for Obama, with more people saying they wouldn’t vote for either candidate (18 percent) than would vote for the Republican nominee (12 percent). In the BBC survey, 50 percent of respondents chose Obama and only 9 percent selected Romney.

Perhaps the administration’s goal to reshape America’s image around the world may have worked, either that or like our elections, this has become a global popularity contest. But what was striking, truly striking was though many nations complain about America’s role in the world and many people tend to criticize us, they seem to be keenly involved in our affairs and care about the outcome. Take for example;

a recent UPI/C-Voter/WIN-Gallup International poll, which surveyed more than 26,000 men and women in 32 countries, 62 percent of respondents said that the U.S. president has a high or very high impact on their lives, and 42 percent felt they should have the right to vote in this year’s contest for that very reason. When you call yourself the leader of the free world, you’d better believe the world is going to take an interest in who you are.

This is a remarkable statistic. People around the world feel that they have a RIGHT to voute in OUR elections due to the level of impact we, the Unites States, have on their lives. For anyone who thinks that our role and influence in the world is demising, please scroll back up and read that again. People around the world not only care about our elections but want to be involved in them as well. We call ourselves the leader of the free world, and get cricized and castigated for it, but it seems as though people still look up to the U.S. and our leaders, perhaps we should start doing the same here at home.

According to UPI data, those who support President Obama;

tend to cite the candidates’ competence, personality, and personal background as the main factors influencing their (theoretical) vote,

While, on the other hand, people in;

countries that are particularly down on the president or supportive of Romney tend to mention the candidates’ policies toward their nations. More broadly, it appears that, with some exceptions, Israel is Romney country and Northern and Western Europe is Obama country, with a skeptical rest of the world in the middle.

It is good to know that we still hold such sway around the world and that everyone in tuned into our elections. Luckily for us, they can watch and admire while we elect our next president.